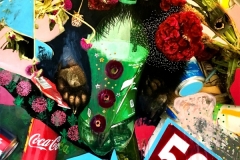 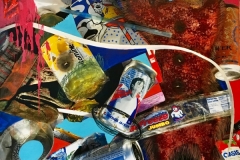 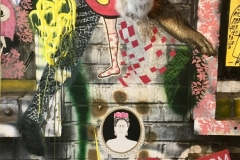 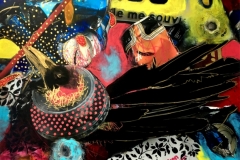 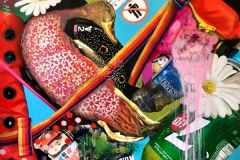 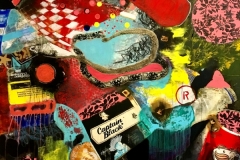 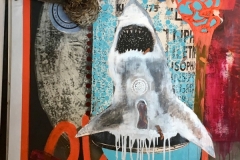 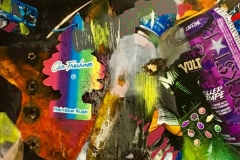 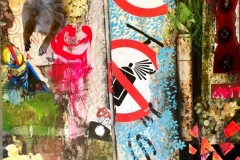 I wanted to slow down the crazy run of the day by imposing a research protocol called Path-process. This protocol consists of walking or running while photographing and / or picking up waste-objects (cultural artifacts). I put them in opposition to plants or animals killed on the roadside (natural artifacts) to create an instant contemporary bestiary. I have long observed that in my wild, northern Abitibi region, a large number of animals or invertebrates are killed. Noting that the speed at which we live endangers the lives of many animals, I felt the need to give them a right to speak and thus pay tribute to them by “totemizing” their corpses. So, giving me the opportunity to apologize for the damage done by my human race!

In my work, AUTOPSY OF A ROAD, I use more the animal artifacts, the stickers-graffiti of the big cities and the waste. I adopt an already existing concept called plogging. “All right from Sweden, this concept is a new physical activity that allows citizens to collect garbage while jogging.” I push this concept further by creating works with collected garbage that I call Plogging art.

We can perceive two realities: the rural reality and the urban reality. The rural version is distinguished by the creation of still lifes by photographing the accumulation of found rubbish set in opposition to dead animals along the roadside. The urban version, meanwhile, is expressed by the photograph of the overload of stickers-graffiti aged by time in opposition to 3D animals that arise or enter the work. Waste is also present without being the focus of attention. In both realities, I intervene in mixed mediums with saturated colors and flat areas of Pop art to recall the advertising language. Stuffed animals are made with the help of taxidermist William Berge, in order to bet on the impact of reality. These two modes of representation start a dialogue: the representation of the object, the still life and the object itself. Both criticize consumer goods, representing the new religion of consumerism!

In this process of creation, I use the dichotomy of aesthetics and raw to observe our often meaningless existence. These traces left by the human are anthropological indices allowing to initiate a societal criticism on our cohabitation with the nature and the impact of the overconsumption. Consumer products situate us in a sociohistorical context. They also help us to perceive our need to fill the void with artifice and satisfy our constant and insatiable desires.

In my research protocol, I always, or almost, repeat the same path to keep me awake to what is happening around me. Like Camus, I use the allegory of Sisyphus. “The man in search of meaning caught in a repetitive journey that he describes as absurd. Does the realization of the absurd require suicide? Camus replies, “No, it requires revolt. »»

It is through art that I am able to channel and express this energy of revolt. It also allows wildlife to revolt and exist in turn through my works. Plogging art is proof of a real gesture. He puts a concrete action and emphasizes the importance of small gestures in everyday life. It prevents me from sinking into the absurdity of this world devoid of meaning and spirituality. A world that often considers nature at the service of humany…